The start of a legacy

Joe Rumore’s “real” radio career began right after high school in 1941. Joe’s first radio employment was with WJLD in Bessemer, AL, for $12 a week with friend Leland Childs. Joe ran the gamut of jobs there from writing commercials to producing his own shows.

One year later Joe literally flew to WSFA, in Montgomery for three times his salary at WJLD. Joe stayed at WSFA for three months before returning home to roost in Birmingham. On April 18, 1943, Joe Rumore made the ride to Alabama’s favorite station at the time, WAPI, “to bring the country to the city folks.”

On April 18, 1943 Joe Rumore resumed his radio career in Birmingham, at WAPI. Over the next 5 years Joe built his following and sponsorship base, that would follow him for the rest of his 40+ year radio career. 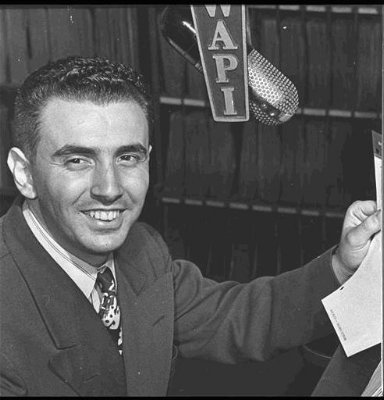 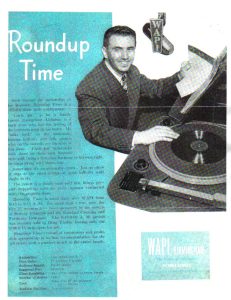 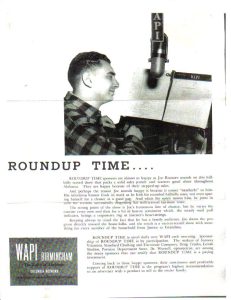 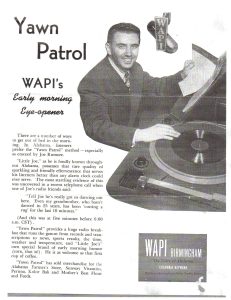 Joe was dubbed “Hill Billy Rose” as he hosted the popular Saturday night show, “Round-Up”. In the early days of his stint at WAPI Joe was at odds with the FCC, for talking directly to persons in his live studio audience(yes, a live studio audience!). Normally in these early days of radio, getting heat from the FCC would mean a death note to a radio career. Not so for Joe. He continued to talk to his audience “confidentially”, and Joe’s popularity continued to grow.

His “Round-Up” program was opposite Don McNeills “Breakfast Club”, considered by most as the most popular show in Birmingham at the time. Joe’s ratings were equal to McNeill’s ratings, if not better in some instances.

Joe started to announce other programs during his stint at WAPI. In addition to “Round-Up Time”,Joe announced “Yawn Patrol”, dubbed “WAPI’s Early Morning Eye Opener”. “Yawn Patrol” quickly became one of the most popular morning shows in Alabama, with both the listening audience, and with sponsors. Joe’s list of sponsors included the Alabama Farmer’s Store, Sunway Vitamins, Peruna, Kolor Bak, And Mother’s Best Flour and Feeds.

Other programs followed for Joe. The include Golden River Boys, Mid-Morning Melodies, Round-Up Time (not to be confused with Round Up. Two different programs.) Songs By Crosby, Accent On Rhythm, Wise And Otherwise, Joe Emerson’s Hymms, Barn News, and WAPI Dancing Party.

Joe was coined “the state’s (Alabama)most articulate and influential exponent of corn in the ozone, and as such, stands as one of the state’s most popular announcer”, in an 1947 article. Other announcers of the time period described Joe, the “most small-talkative person in the world, who has to talk, and there’re no two ways about it.”

One example of Joe’s popularity would be just before Mother’s Day, 1947. Joe signed off one of his programs with “Gee, all you mothers of mine, I wish I could see you Sunday. Or at least send each of you a card, or flowers, or kiss. But I can’t so please accept my wishes right here and now for your happy Mother’s Day. The next week, Joe received 2,347 “thank you” notes from North Alabama and Mississippi mothers.

Another example of Joe’s popularity would be the the large chain reaction of fan mail every time Joe mentioned the name of a patient that was shut-in, and asking the audience to write in. While at WAPI Joe regularly received more than 2500 pieces of fan mail each week, attesting to Joe’s enormous popularity.

Change was on the horizon for Joe. On April 6, 1948, Joe and his wife, Angie were wed. Changes were also on the horizon for Joe’s radio career. In October, 1948 . Joe would make one more job change, a change that would profoundly affect radio in Birmingam, and most of the Southeast for the next 30+ years.